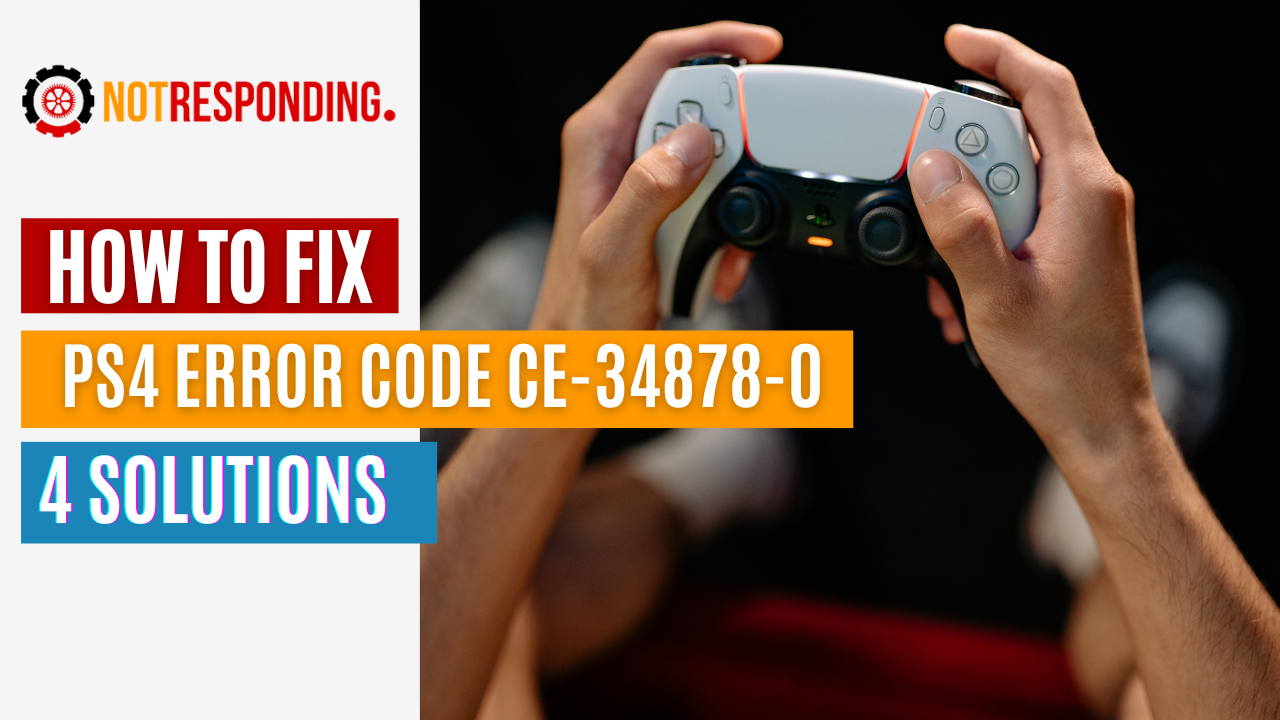 With the advent of information technology, gaming has become one of my most common passions. Players from all over the globe feel excited and accomplished while playing these online games.

But an error in the middle of the game is frustrating. Although the gaming industry has risen to great potential, errors and malfunctioning are standard parts. One such error that is reported frequently is PS4 Error Code ce-34878-0

Although the error code indicates that the game is not responding well, we will dig deeper into this issue in the following few paragraphs.

The Error code CE-34878-0 in PS4 is a code execution and hexadecimal number error code. It occurs when the user is trying to perform an application, but the system cannot judge the proper way of its execution.

This system’s inability mainly arises because of unsuitably installed game applications, missing libraries, corrupted or errored system files, or other reasons. Sometimes, you may get this error code with the title PSERR_BADAPP.

According to various reports, the app or the game undergoing this error crashes after a short time, and the code CE-34878-0 appears on the screen. Some users say that Restarting the game to fix the error. But the question mark still arises for many who encounter the error repeatedly.

Many users ask about the total crashing of the game after error code. It is because one or more core files run the game. When these files cannot be accessed due to damage or corruption, it entails crashing the game.

To make this error resolvable for everyone, it is critical to dig into the possible causes that can trigger it.

PS4 Error (CE-34878-0) is a software-level issue that indicates a sort of data error within your saved data system. This can be the result of one of the following reasons:

The first and foremost possible reason is that the game is Improperly installed. Sometimes the update in the app or the game is also not appropriately installed, resulting in this error.

The PS4 is not maintained correctly and is dirty inside. It results in the system overheating, ultimately leading to the system’s inability to process the instructions properly.

Sometimes, Incompatibility issues arise between the game being played and the installed version of PS4 system software. This incompatibility ultimately led to various errors, out of which one is PS4 error code CE-34878-0.

Sometimes, the PS4 system core files get damaged and corrupted, leading to this error.

An unstable or interrupted power system or a damaged PS4 power cord can also be the reason behind this error.  If there is a defective PS4 power supply, a broken power outlet or strip, or some short circuits in some part of the PS4 motherboard also results in this error.

If the USB storage device on which the user is running the app or the game is defective or needs maintenance, even then, the error is expected.

1. Try a Power Cycle for Your PS4- Restart

The most basic and straightforward thing to try is to restart the PS4. If continuing is not helping resolve CE-34878-0, turn off your PS4 and unplug the power cable from the main power supply. Carry out this operation by following these simple steps:

Several benefits are related to turning off the update PS4 firmware. It enhances the overall performance of the game. Therefore, it is recommended as one of the most common solutions by various experts on PS4 errors.

When you find that the console has booted up, launch the particular app or game disrupted because of the error. See if the Error CE-34878-0 pops up again or not. If the PS4 is not turning on, keep trying until you get it properly functioning.

If CE-34878-0 is again triggered, but after taking longer than before, it entails that they are on the right track of tracing and diagnosing the error. Now try turning off the PS4 again. This time you’re waiting for the duration should be 5-10 minutes before you turn it back on.

2. Shift Your Game or App to the Internal System Storage

Sometimes the users encounter PS4 Error Code CE-34878-0 on an app or game installed on an external HDD. It results as a result of problematic external HDD.

In this case, experts recommend that you shift your game to the internal storage of your PS4 or install the original HDD. Once moved, try it again; if the error is persistent, try another fix.

3. Update the System Software for Your PS4

Keeping an updated console that installs the latest system software is always wise.

Proceed with the process as mentioned below:

Sometimes the error results from some problem within the app or the game. The improper or deficient coded file can result in an error.  These errors are one of the primary reasons why manufacturers release updated apps and games to fix the issue.

You can make your gaming experience smooth if you can handle and troubleshoot errors like PS4 error code ce-34878-0. We have tried to help the gamers by explaining the error in detail with possible fixes.